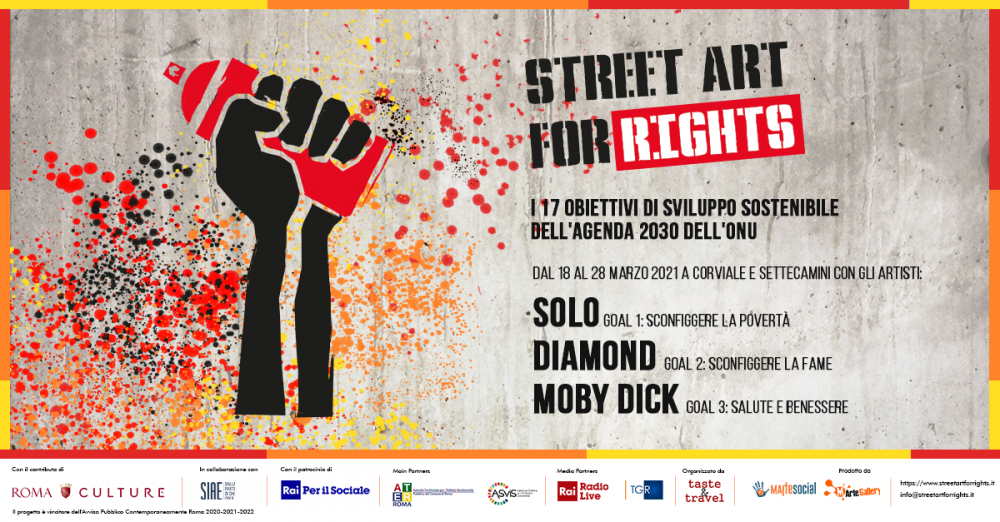 Seventeen works of urban art of seventeen artists national and international, made in the outskirts of Rome to tell the objectives of Sustainable Development 2030 –Sustainable Development Goals (SDGs)– dell’agenda ONU, through the immediate and disruptive language of street art. This is Street Art for RIGHTS, an artistic and social action, that starts from the urban suburbs to urge changetowards a more sustainable future with a view to collective commitment and awareness, with a three-year program of activities aimed at the future creation ofan open-air museum, public and free, outsideof the most traveled routes in the capital.

The Street Art For Rights project, conceived and directed by Joseph House and edited by Oriana Rizzuto, is organized by the cultural association Taste and Travel in collaboration with MArtegallery, is scheduled to Rome of Thursday 18 of Domenica 28 March 2021 and, in its first annuity it is dedicated to the first tre goals dell’Agenda 2030 HIM-HER-IT: defeat hunger (GOAL 1), defeat poverty, (GOAL 2), and health and well-being (GOAL 3). Diamond, Solo e Moby Dick, street artists Italians among the best known also internationally, are the artists called to interpret them, and to give them an echo from the facades of the buildings in the Settecamini and Corviale districts.

Coming from different areas of the Capitoline street art scene and chosen for having made civil commitment the center of their business, the three artists will return, each from their own personal point of view, a powerful image on the lens and on thekey concept of sustainable development, from which all the actions that can be implemented by institutions arise, Companies, single people.

It begins Thursday 18 March 2021 pm 16.00 a online round table, live on the social channels of the event, in collaboration with ASviS and with the participation of all the representatives of the institutional partners of the project. Since the opening of the festival, the artists will begin to work on the works, with a view to respecting the “spirit of the places” and their identity and with particular attention to the environment, thanks also to the use of special paints AirLite capable of absorbing pollutants and transforming them into inert substances through a chemical process activated by sunlight. Central point of the whole project Street art for rights it is also the involvement of the entire community that will be able to share ideas with the artists, stories and proposals during the realization of the murals, in un workshop talk with online artists open to all scheduled Monday 22 March at 16.00. Each mural will also be marked with a QR Code which will provide more information on the artists and works, on the characteristics of the places, of the objectives to which they refer, promoting the dissemination of the values ​​on which the event is based.

The final inauguration of the murals is scheduled for Sunday 28 March 2021, with a whole day dedicated to the contamination between artistic genres, always a central element in the project MArteGAllery who organized a series of contemporary circus performances (this year without an audience) in the places involved. Special guests will be the Italian street theater company Crème & Burnt and the circus artist Irene Croce, who will stage performances by physical theater, art of fire and dance broadcast in live streaming on social channels from hours 17.30. Themaking of of the event will be documented through the photographer's lensGloria Viggiani, expert observer ofurban art, whose pictures, together with those of the other two photographers chosen for the next editions, will flow into onemostra ea catalogo about the festival, which will mark the GOAL 0, or the conclusion and communication of the entire project.

An integral part ofStreet Arts For Rights finally, it is the promotion of good practice models aimed at concretely supporting the associations and third sector entities active in the realization of objectives connected and similar to the spirit of the UN Agenda 2030. With this in mind, together with the festival, one will startcrowdfunding campaign in favor of partner associations directly involved in this year's objectives.A further confirmation of a vision that embraces sustainability in all possible forms; not only that of environmental protection but also in the perspective of respect forhuman rights, cultural and social and accessible wellness, such as the fight against hunger and poverty.

The project, promosso da Roma Culture, is winner of’Public NoticeAt the same time Rome 2020-2021-2022edited by Cultural Activities Departmentand is made in collaboration with SIAE.

The works will be carried out on the walls of the A.T.E.R.. at Settecamini, in via di Casal Bianco and in via di Settecamini (Town Hall IV), and on a wall of a thermal power plant near Corviale, in via Marino Mazzacurati (Town Hall VI).

Online events open in live streaming on the social channels of the event (18-28 March 2021)
sito: www.streetartforrights.it