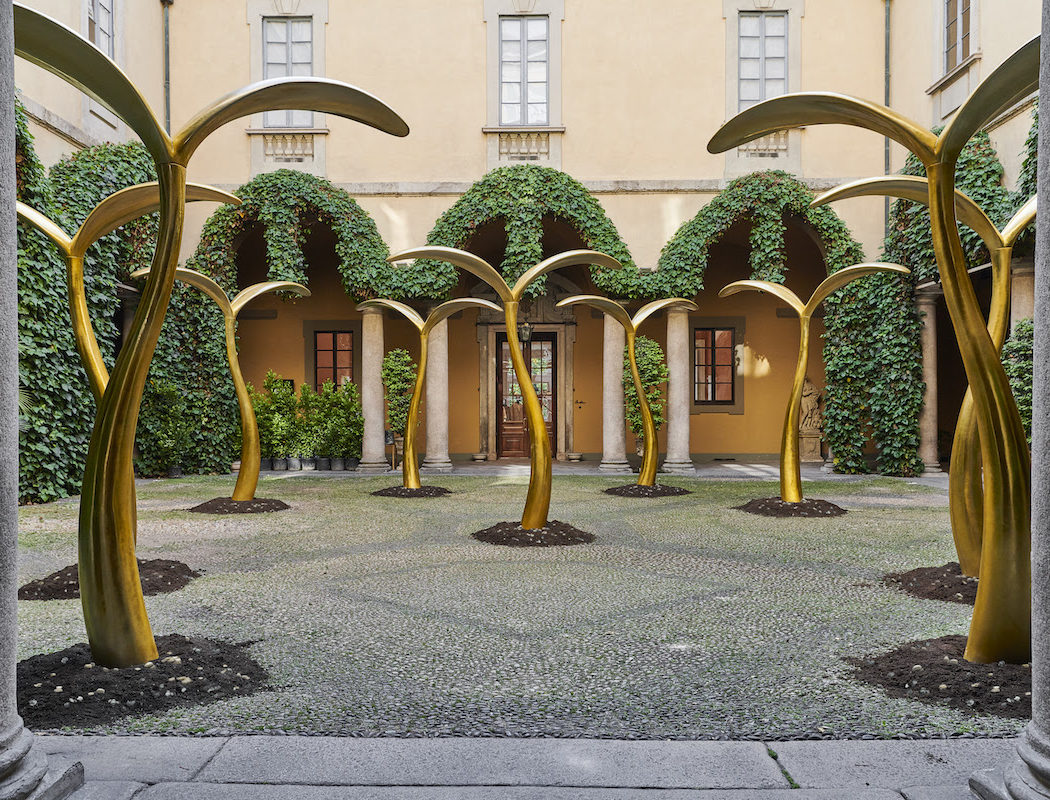 In occasione della Milano Design Week 2022, Natuzzi Italy puts the spotlight on a theme closely linked to his land, the Puglia, and still little known both in Italy and abroad: the dramatic Xylella epidemic which for some years has been affecting the olive groves of the region - suffering from rapid drying - and which risks becoming a real scourge for the entire Mediterranean area. The company therefore decided to raise awareness of the Milanese design week through the installation Sprouts by Marcantonio, visible to the public in the courtyard of Palazzo Durini Caproni di Taliedo – adjacent to the flagship store – nei giorni 8 and 9 June.
Natuzzi Italy, also, holds concretely Save the Olives, first NGO to have activated awareness and fundraising projects in support of scientific research against xylella, through the photographic exhibition THREE(It)PIDATION by Giampaolo Sgura inside the new showroom in via Durini redesigned by Fabio Novembre: from 7 June it will be possible to buy 3 photographs by Giampaolo Sgura through the Save the Olives e-commerce platform (savetheolives.com)and the proceeds will be donated to the association.

This commitment is part of the concept The Circle of Harmony – Second Life, around which the new collection of the brand develops, reflecting on the theme of sustainability in an ever more coherent and concrete way, both through the products and through the attention to sensitive issues concerning the relationship between nature, the territory and society.

MARCANTONIO - SPROUTS installation
For celebrate concept Second Life, Natuzzi Italia has entrusted the artist and designer Marcantonio an evocative and suggestive installation in the courtyard of Palazzo Durini Caproni di Taliedo which houses the brand's Milanese showroom. The ideal goal is to involve all visitors in the spirit of Circle of Harmony, crossroads of experiences, suggestions and creative blending. Starting from the idea of ​​rebirth and wanting underline the close link that today more than ever binds us to nature and the environment, Marcantonio has decided to transform one of the most significant courtyards in the center of Milan into a fairytale world in which the paving, or better, from the earth, sprout gigantic olive shoots.

“The sprout is something perfect, it represents the birth of something new and is a symbol of positivity”, states Marcantonio. “I imagined some giant shoots, out of range, to remind us of the power of nature with respect to which we are like little ants”. Featuring a golden mirror surface, i gigantic shoots (high about 4 meters) they reflect the sunlight by imitating, on the one hand, la natura, and on the other, the classical and Renaissance decorations in which plant elements evoke life and rebirth.

“The shoots I represented are those of the olive tree, symbolic tree of Puglia”, read moreMarcantonio. “Its wood is precious, è forte, its fruit is an emblem of fertility and memory for all the countries bordering the Mediterranean and creates a unique cultural bond between them”.

Sprouts represents a tribute to the union between man and nature and shines the spotlight on an urgent problem that is gripping the olive groves in Puglia and requires incisive action: theXylella. This infesting bacterium indeed, appeared in Puglia in 2013, it is rapidly destroying thousands of hectares of olive groves and is in danger of spreading across the Mediterranean.