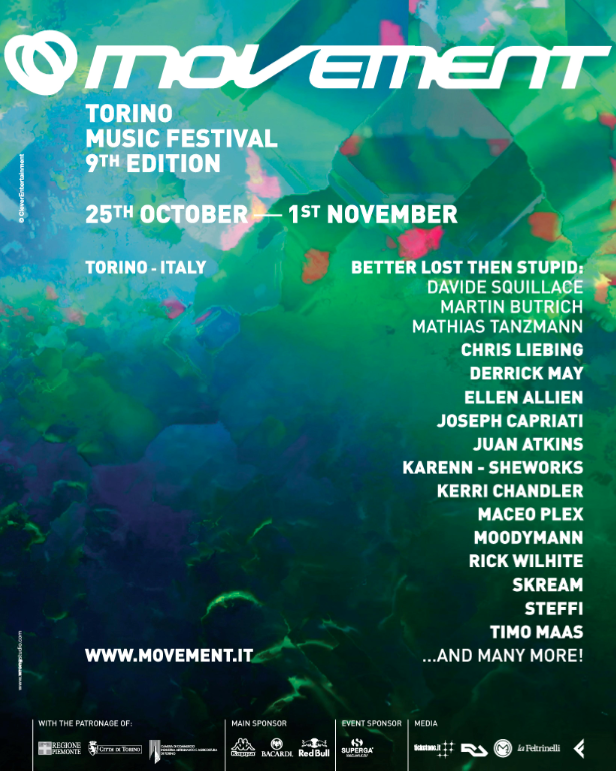 MOVEMENT TORINO MUSIC FESTIVAL, Italian cousin of the legendary Detroit Electronic Music Festival (DEMF), torna a Turin for the ninth year with a week full of appointments 25 October to 1 November 2014.
The bill provides for the most interesting names in the scene and will host superstar DJs who will take turns on the three stages of Lingotto Fiere Hall 3: Karenn-Sheworks live set a dj set di Ellen Allien, BLTS (Davide Squillace, Matthias Tanzmann, Martin Buttrich), Joseph Capriati, Chris Liebing, Skream, Steffi, Timo Maas, Maceo Plex, Gardens of God, Barnt, Kerri Chandler, Derrick May, Moodyman, Theo Parrish, Strip Stevee, Boaz Of The Beatz, Dilligas, Ackeejuice Rocker and many more. There will of course many local artists that for years the Festival supports and proposes, as Lollino, Just a Mood, Gandalf, Say Yeah Crew e Rudemates.
Even in 2014 MOVEMENT TORINO MUSIC FESTIVAL will transform the area and the city by appropriating places that will become space for multiple representations of contemporary electronic music. Moreover, thanks to the collaboration with important cultural institutions such as the Giuseppe Verdi Conservatory of Turin, the Polytechnic University and the Museum of saving the program of the Festival will be enriched by meetings, seminars and in-depth capable of complete, even during the day, great experience for fans of contemporary culture.

Syllabus 2014:
– 25.10.2014: Opening Party “Superga B-Day Party” presenta “Ellum” – Loud Club
Starring: Maceo Plex, Gardens of God, Barnt
The inaugural event will be held at Loud Movement Club (ex La Gare): one of the coolest clubs in Turin, arose in the headquarters of the railway and after work recently renovated and refurbished facilities with cutting-edge audio and video-led. Project will be presented “Ellum”, the record label founded by Maceo Plex, the most awaited guest of the evening.
– 28.10.2014: Movement Culture by Red Bull Music Academy – Giuseppe Verdi Conservatory
Starring: Juan Atkins
A cultural event that covers prestige this edition of Movement, the suggestion to listen to electronic music in a classic and rich in history as one of the Giuseppe Verdi Conservatory. The project will be presented at this meeting is “Borderland”, an artistic / visual conceived by Juan Atkins, considered one of the inventors of techno, and Moritz Von Oswald, among the most influential producers of electronic music from the 90s to today.
– 31.10.2014: MOVEMENT MAIN SHOW – Lingotto Fiere Hall 3
Starring: Ellen Allien, , BLTS, Joseph Capriati, Karenn-Shework, Chris Liebing, Skream, Steffi, Timo Maas, Derrick May, Moodyman, Theo Parrish. Electro Room: Strip Stevee, Boaz Of The Beatz, Dilligas, Ackeejuice Rocker.
– 01.11.2014: Superga Closing Party – Loud Club
Starring: Kerry Chandler
The closing event of Movement will be held at the Club where Loud sound Kerry Chandler, universally recognized as one of the founding fathers of deep house.
MOVEMENT TORINO MUSIC FESTIVAL is proposed as a cultural manifestation economically sustainable because it produces more wealth of resources it consumes, and is capable of realizing an economic impact of over 1.000.000 of promoting the euro area with an increasingly attentive range of cultural and entertainment, improving every year 15% the degree of integration with the environment. In addition, the Festival takes a lot of resources for its implementation: are almost 400 In fact, the people involved in various capacities in the production of the event.
Great importance is given to issues of innovation: MOVEMENT aspires to become the "most consumer friendly" festival in Italy for hospitality, Ticket sales, flow of information through the use of best available technologies, for example, one that allows the purchase of the ticket directly from digital applications.
For many who take advantage of the festival to learn about Turin and Piedmont MOVEMENT then proposes his "Movement Hospitality System", its integrated system for better reception of guests: conveys the overnight stays in hotels of the area according to the spending capacity of each, stimulates the use of public transport GTT, treni Italo-NTV and prontoTaxi 011.5737 and finally promotes cultural routes and urban Charter Museums Pyou Card.

Ping Pong guiding theme of the summer of Pitti Uomo 86

Pitti Ping Pong is the guiding theme of Pitti Uomo 86 and talk about sports - a topic that next summer, on the occasion of…