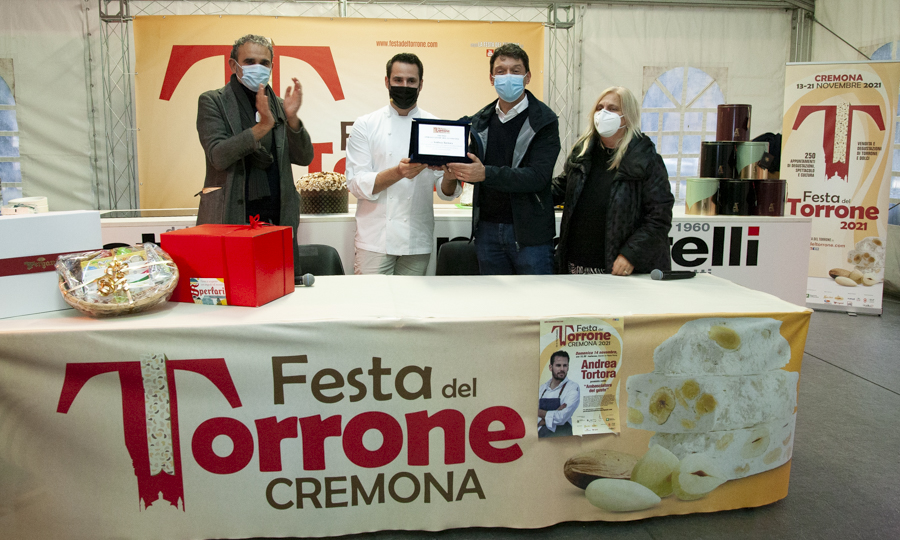 Andrea Tortora wins the Ambassador of Taste award, one of the most coveted awards in history Torrone Festival in Cremona.

“Son of art of pastry chefs and of Cremona, today Andrea Tortora is awarded the Ambassador of Taste award which is also an honor that also makes him ambassador of the city, tells how to do business in an innovative way, with the ability to know how to taste the food but also the culture of our city. We are one of the most important dessert centers in Italy,  Cremona's future is to innovate and give space to young people and Andrea Tortora represents all of this" tellsGianluca Galimberti, mayor of Cremona.

“To be rewarded in one's hometown, even after so many awards abroad, it's really meaningful to me, it is a return to the origins, it is an award that confirms how important it is to know the tradition and our past, before innovating and looking to the future " says the pastry chefAndrea Tortora. “I can say that this award gives me even more strength in what I have been trying to do for a long time now:  bring the Italian pastry tradition to the rest of the world, I was among the first to believe in online shipping, precisely because I traveled a lot and I was sure that this habit would also arrive in Italy. Today panettone is known in the world more than tiramisu, I hope the same will happen soon for the nougat”. And he adds: “Credo that as an entrepreneur and Ambassador of Taste now, it is important to invest in human capital and teach and transmit all one's notions to build the future and give continuity to one's art”.

“We chose Andrea Tortora for a unique combination: a very high level curriculum, many international prizes too, and young age. Andrea Tortora is considered the rising star of Italian pastry, and it is the first time that we have awarded a Cremonese as Ambassador of Taste”Says Stefano Pellicciardi of SGP Grandi Eventi, organizzatore della manifestazione.

Andrea Tortora, Cremonese by birth and the son of pastry chefs in the fourth generation and with an international curriculum – from Paris to London, from Singapore to Venice - for years at the helm of the pastry shop at the St. Hubertus, achieving in 2018 thethird Michelin star as a pastry chef.

At the age of thirty he obtained the recognition of Maestro Ampi by joining the Academy of Italian Pastry Masters. His ever-growing professional career leads him to 2017 to give life to his projectAT Pastry chef, the personal collection of great author's leavened products: Panettone, PandOro and Tortora Egg, three great stories that speak of tradition, Italian creativity and taste.

Andrea's inseparable travel companion continues to beCarletto, the mother yeast created at the age of 17 years together with his grandfather Vamor, always lovingly maintained and refreshed to this day.

The edition 2021 of the Torrone Festival, in its original form from 13 to the 21 November awaits you in the streets of the center of Cremona with a packed program of events with ben 9 days of shows, concerts, gastronomic meetings, showcooking performances and numerous initiatives that attract thousands of visitors every year.

Recipe of zabaglione with a crunchy nougat to combine with its panettone.

Heat everything together in a bain-marie in a copper bowl for 4-5 minutes until you get to 85 degrees while continuing to mix with a whisk with great energy. Immediately change the container for the cream to stop cooking and crumble the crunchy nougat to form the perfect cream to combine with the panettone.